We’re really indebted to Ted Pearce, who reached out to us at Chavah Messianic Radio and contributed his latest professional and spirit-filled works to the station, to the benefit of you, the fine Messianic music aficionado. That’s Ted for you: 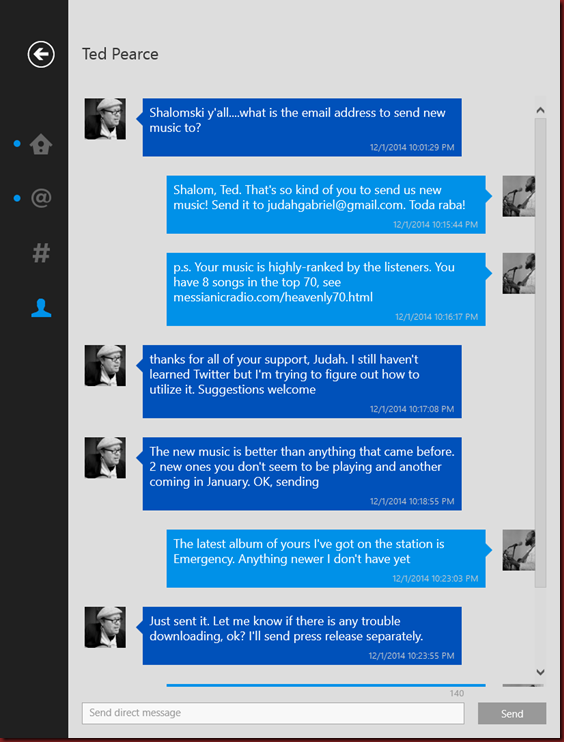 I bet the number of Ted Pearce songs in the top 70 is going to increase with this new music he’s sending us.

Beginning in Feb 2013, recording artist Ted Pearce started work on a series of recordings in Hollywood California, Warsaw Poland, and Jerusalem Israel. These various recordings featured a wide variety of musicians & genres, as the influences of each city and culture were manifest in the respective songs being recorded.

Warsaw Sessions CX#1 is Produced by Pawel Zarecki & co-produced by Jamie Hilsden, this disk started as an experiment of bringing some of the greatest musicians of Poland together with several Israeli musicians, including Watchman Vision & Jamie Hilsden to make a joyful sound of praise from Poland! Making a cameo appearance, Deborah Kline-Iantorno sings on “Who Has Ascended?” and Jadzia Zarecka is a featured vocalist on “Psalm 2”. The idea behind this CD is building bridges between Poland and Israel, so it’s an eclectic collection of Polish and Israeli influences in the music. Originally released in Tubingen Germany March 2014 to kick off a two month eurotour, Warsaw Sessions debuted in America at Messiah College 2014 with rising star and Israeli singer, Elihana Elias, joining Ted onstage.

I hope you guys enjoy Ted’s music, and if you do, please support him! You can buy his songs in time for Chanukah over at tedpearce.com