Showing posts from June, 2013
Show all

We’re honored to be playing Misha Goetz’s first full album, just released:Misha Goetz – Weight of Glory:(Support Messiah’s musicians: purchase Misha Goetz – Weight of Glory.)If the name sounds familiar, it should! Misha is the daughter of famed psalmist and pianist Marty Goetz, whose music has graced the Messianic movement for decades.(Marty joins Misha on the final song on the album, Aaronic Benediction, and it’s positively beautiful.)But Misha is destined, I think, to grow beyond even the recognition of her father. Her worship to Israel’s Messiah is gentle yet powerful, peaceful yet stirring the heart. As I listen to Weight of Glory on this shabbat, I’m taken aback by the beauty and peace flowing through these psalms, my heart is moved towards the Lord.Chavah Messianic Radio was proud to have helped fund this album via Kickstarter. Now that the album is finished, and we see the fruit of all this, we’re so glad to have been even a small part of it. The album’s sweet, melodious psalms…
Post a Comment
Read more

FAQ: How can I thumb-up (or down) a song on Chavah? 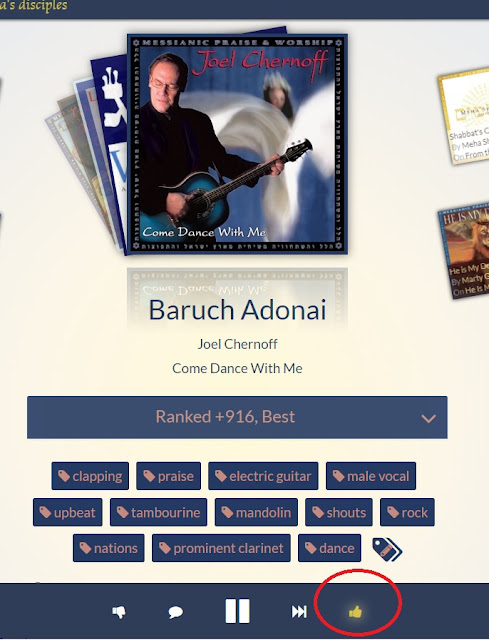 Q. Some songs on Chavah I like, and others I don't. Can I tell Chavah to play more of the ones I like, and less of the ones I don't?A. Yes, Chavah lets you thumb-up songs you like and thumb-down songs you dislike. To thumb-up a song, click the thumb-up icon to the right of the play button:

Q. What happens when I thumb-up a song? When I thumb-down?A. Thumbing-up a song will tell Chavah you like that song. She'll play that song, and songs similar to it, more often for you. Thumbing up a song will increase the song's community rank (that number between the arrows). The higher the community rank, the more that song is played for everyone.
Thumbing-down a song tells Chavah not to play that song for you. She'll put it on the backburner; she won't play it for you, even if someone does a song request for it. Thumbing-down a song will decrease its community rank, and songs with low ranks will play less often for…
1 comment
Read more
More posts